Go Back To All Developing a Relationship with Stepchildren Articles

How to Build a Relationship With Your Stepchild

Little is more challenging than the role of Christian stepparent. In short, the stepparent joins the biological parent in raising his or her child, but does so initially without a clear bond with the child. The stepparent-stepchild relationship is weak due to little emotional connection and only a brief shared history (developed while the adults were courting), making the stepparent’s role very difficult and frustrating.

Consider the e-mail I received from a biological father looking for help:

Jean is the stepmother to my seven-year-old son. In the past ten weeks, a very intense relationship has developed between them. Once inseparable, Jean now wants nothing to do with him and has told him as much. This has strained our marriage, and she has talked about leaving. Our marriage is as perfect as one can get when my son is visiting his mother, but when he returns it is very uncomfortable for everyone. My wife does not understand why God is doing this to her, and she is questioning her faith.

I can just imagine this stepmother explaining her situation. She likely feels confused about her role, displaced from her husband when her stepson is around and helpless to change the situation. My experience tells me that despite all this, she is also feeling guilty, knowing that God expects her to love this boy. Finding an effective stepparent role is indeed a challenge, yet with healthy expectations and a specific strategy to build relationship, a satisfying bond can be nurtured.

Stepparents and biological parents alike frequently expect too much from the stepparent, especially early in the stepfamily’s development. Research confirms that stepparents and biological parents generally assume that the stepparent should be affectionate with stepchildren and should attempt to assert authority to establish their position as “parent.” However, stepchildren report—even five years after the wedding—they wish the stepparent would seek less physical affection and back away from asserting punishment. The challenge for biological and stepparents is to lower their expectations and negotiate a relationship that is mutually suitable to both stepchild and stepparent. Let’s examine some key principles that may help.

1. Give yourself time to develop a workable relationship. Love and care take time to develop, especially with pre-adolescent and adolescent children. Some research suggests that children under the age of five will bond with a stepparent within one to two years; however, older children, teenagers in particular, may take as many years as they are old when the remarriage takes place. Try to imagine your stepfamily in a crock-pot—it’s slow cooking, so don’t rush it. Here are some tips for keeping it on low heat:

2. Children’s loyalty to their biological parents may interfere with their acceptance of you. Children are often emotionally torn when they enjoy a stepparent. The fear that liking you somehow hurts their non-custodial parent is common. The ensuing guilt they experience may lead to disobedient behavior and a closed heart. In order to help stepchildren deal with this struggle:

3. The cardinal rule for stepparent-stepchild relationships is this: Let the children set their pace for their relationship with you. If your stepchildren are open to you and seem to want physical affection from you, don’t leave them disappointed. But if they remain aloof and cautious, don’t force yourself on them. Respect their boundaries because it often represents their confusion over the new relationship and their loss from the past. As time brings you together, slowly increase your personal involvement and affections.


Find more like this in our online course just for blended marriages!

Recently a gentleman told me that it took 30 years before he could tell his stepfather he loved him. Undoubtedly, his stepfather struggled through those years for his stepson’s acceptance. But despite his godly attitude and leadership, his stepson simply couldn’t allow himself to return that love. Eventually, love won out, and he was able to express appreciation to his stepfather for being involved in his life. Trust that doing the right things in the name of Christ will eventually bring you and your stepchildren together. Until that day arrives, set realistic expectations that don’t leave you feeling like a failure.

Relax—that’s an interesting word to hear when you feel like you’re not making any progress as a stepparent, yet that’s exactly the word I continue to use with stepfamilies. The crock-pot will eventually bring you closer together with your stepchildren, but you can’t force their affections. So relax, accept the current level of relationship, and trust the crock-pot to increase your connection over time. In the mean time, use the following suggestions to help you to be intentional about slowly building your relationship.

First, monitor1 your stepchildren’s activities early on. Know what they are doing at school, church, and in extracurricular activities, and make it your aim to be a part. Take them to soccer practice, ask about the math test they studied for, and help them to learn their lines in the school play. Monitoring seeks to balance interest in the child without coming on too strong.

Second, throughout the first year of remarriage, stepparents should be involved with stepchildren when another family member can be present. This “group” family activity reduces the anxiety children feel with one-on-one time with a stepparent. Adults frequently assume that the way to get to know their stepchildren is to spend personal, exclusive time with them. This may be true with some stepchildren; however, most stepchildren prefer to not be thrown into that kind of situation until they have had time to grow comfortable with the stepparent. Honor that feeling until the child makes it obvious that he or she is okay with one-on-one time.

Third, share your talents, skills, and interests with the child and become curious about theirs. If you know how to play the guitar and a stepchild is interested, take time to show him how. If the child is interested in a particular series of books or a video game, become interested and ask her to tell you about it. These shared interests become points of connection that strengthen trust between stepparent and stepchild.

Sharing the Lord through dialogue, music, or church activity is another tremendous source of connection. For example, service projects are wonderful activities for parents and stepparents to experience together. Little brings people together like serving others in the name of Christ. Discussing values through the eyes of Christ and having family devotional time can also strengthen your relationship and encourage spiritual formation in the child.

Perhaps the most confusing role for a stepparent is how to set limits, teach values, and enforce consequences. The most common pitfall for stepfamilies is when the biological parent gives too much responsibility for child rearing to the stepparent and he or she begins to punish the child for misbehavior too quickly. A unified team approach that involves both biological and stepparent is best.

Negotiating a household set of rules and conduct involves both adults, but takes place (initially) outside of earshot of the children. As all effective parents, the couple must discuss rules, standards, consequences, and a system of discipline for the children. Then the biological parent can communicate this to the children. When either adult acts outside these negotiated rules (or fails to uphold them), children can divide and conquer the couple. Conflict and resentment are sure to result.

Later, when the biological parent enters the picture, they should support the stepparent’s decisions, and then reinforce their expectation that the child obey the stepparent in the future. This baby-sitter role thus creates space for the stepparent and stepchildren to build relationship and at the same time empowers the stepparent to have influence in the home.

Eventually, the stepparent may move from a baby-sitter role to that of an uncle or aunt (viewed as “extended family” but not the full authority of parenthood). In addition, because stepparents will bond with younger children much sooner, they may be “extended family” to young children and “the baby-sitter” with older children. As you can tell, keeping open communication about the stepparent’s changing role with children is an important task for couples.

The challenges of stepparenting are very real. The importance of your role in the life of your stepchild is invaluable. Commit yourself to the Lord, and offer His love to your stepchildren (to whatever degree possible). You may never realize how important you are. 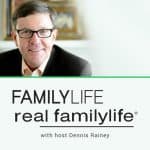 with Dennis Rainey October 4, 2022
Peer pressure is not always bad.