Go Back To All Spiritual Disciplines Articles

Freed From the Scars of Abuse

An interview with Josh McDowell about his life and his difficult childhood years.

By FamilyLife
Editor’s Note: Josh McDowell, an internationally known author and speaker, was interviewed on FamilyLife Today about his book, Undaunted, which tells the story of his life and his difficult childhood years.  The following was adapted and condensed from this interview.

Dennis: You described your father in the book as a pioneer.

Josh: My father was a small man. He must have been pretty sharp because he became the manager of a huge A&P store. Everything was going well. But alcohol got to him. He lost the store and everything. We ended up on a farm.

I would go out to the barn, at age 8 or 9 years, and see my mother lying in the manure, in a gutter, behind the cows. My father, where he was half-drunk, would yank the air holes off the milk pipes and beat my mother to a bloody pulp … until she was so weak and bloody she couldn’t stand up. I remember running in, and pushing him, and kicking him. All I ever wanted was for him to stop hurting my mother, whom I loved so much.

I grew up with guilt that it was my fault that my father was able to hurt my mother because I couldn’t stop him. I remember that first time I could stop him—I felt so good. I felt like I was relieved from all of the guilt—that, “Now, I could do it!”

Bob: There was a sense of needing to protect your mom that was bone-deep inside of you.

Josh: Oh, and my sisters and all. I felt a need that if I didn’t protect them, I wasn’t a loving brother.

Bob: Were you the youngest in the family?

Josh: Yes, I was the baby. There were five of us.

Bob: Where were they in the midst of all of this?

Josh: They had all pretty much left home because they were so much older than I was.

Bob: But they had to know what was going on, back at the farm, with little Josh?

Josh: I’m sure they did—with the alcohol.

But probably equal to the alcohol and the violence in the family [was that] for seven years, every week, I was abused in my own home by a man by the name of Wayne Bailey. He had been hired to be a cook and a housekeeper on the farm because my mom was so big her body could not carry her weight. She was in bed all of the time. The doctors would come out to put her hips back in place.

So, they hired Wayne to be a cook and a housekeeper. [When my mom would leave the house], she would always grab my shirt, make me stand in front of Wayne Bailey, and she would say: “Now, Josh. You obey Wayne. You do everything he tells you to do. If you’re disobedient, you’re going to get a thrashing when I get home.” And you did not want a thrashing from my mother!

When I was 9 years old, I got up the courage … to go to my mother and tell her [about the abuse]. She wouldn’t believe me. She made me go out in back. We had this huge willow tree, and I had to break off a twig. She made me take off my shirt, and she whipped me. Boy, can I still feel it! She whipped me until I said I was sorry for lying. That was probably the loneliest, most fearful, scary day of my life because, [being] 9 years old, I knew that what was being done to me was evil. [And] I couldn’t do anything about it. My parents wouldn’t do anything about it.

I remember being so scared and fearful. It even affects me today. If I’m in a room alone … and any man walks into the room … an instant fear grips me, only for several seconds. I can’t explain it; it just grips me!

Finally, [when I was] 13 years old, my mom had gone downtown with my dad. Wayne Bailey came up and put his hand on my shoulder. I spun around, and cupped my hand around his throat, and pushed him against the wall. I said, “If you ever touch me again, I will kill you.” He never touched me again.

Bob: … Evil was done, but God has redeemed it and used it for good. It’s hard to even think that there could be any gratitude. That you wouldn’t just wall off that part of your life and say, “I wish it had never happened.”

Josh: I trusted Jesus at the university. Most people think I had an intellectual problem with Christianity. Well, I did … but my greatest problem was not intellectual.

People would say to me, “You have a heavenly Father who loves you.” That didn’t bring joy into my life. That brought pain because I was not able … to discern the difference between a heavenly Father and an earthly father. I looked at God [and thought], I’m not going to look up to God. He’ll hurt me if He is my heavenly Father. That was one of the greatest barriers I had to overcome.

After I trusted Jesus, I had to tell someone [about the abuse]. It was just a burning fire in my chest that I had to tell somebody! I don’t think I was looking for answers. I don’t think I was looking for counseling or anything. I really believe I just wanted someone to believe me. So, I went to the man who led me to Christ, a pastor of a little, tiny church, a very wise man. I called him up and asked, “Can I come over and talk?” I went over, and I sat there for 45 minutes, and I couldn’t say it.  Finally, I just blurted it out; and he believed me!

Oh guys, it was like being born again. He believed me. For six months, he mentored me out of the Scriptures. People say to me, “Why do you have such deep convictions that the Bible is true?” I say, “Well, for one, intellectually, I know it is true; but emotionally, it has changed my life.”

Copyright © 2013 by FamilyLife. All rights reserved. 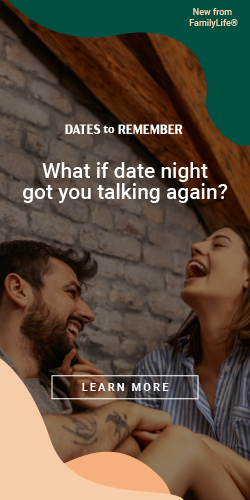