Should We Talk to our Kids About Ahmaud Arbery?

Ahmaud Arbery’s death isn’t just about politics. It’s a chance to teach our kids to think and act with Christian minds in areas we’d rather avoid.

When the Ahmaud Arbery story broke, some of my friends were devastated.  Days later, others still had no idea what happened.

The disparity between those reactions is worth reflecting on.

A 25-year-old man was gunned down in the street, chased by two men with guns in their truck. He was jogging in their neighborhood. With no evidence, they said he looked like a breaking and entering suspect. The dead man, Ahmaud, is black; the two men who killed him, Gregory and Travis McMichael, are white. Two and a half months later, after a video of the incident surfaced, they were arrested for murder.

It’s easy to ignore or be unaffected by evil that happens outside our own immediate community.

But God cares about it. And people all around you in your corner of the world care about it.

No matter what camp you fall in, someone you know is talking about this. Someone around you is grieving because of this horrible wrong.

And if you have kids with phones, they’ve heard about it and are processing it.

So that’s plenty of reason to think more about it ourselves.

Why our kids need us to talk about Ahmaud Arbery

I’m concerned that each time one of these situations arises and I don’t address it with my kids, I’m teaching them it doesn’t matter. Or that I don’t care. Or that silence in the face of injustice is acceptable.

“Well, I can’t make every tragic situation an issue in my home, can I?”

Of course not. But never making any of them an issue is equally problematic.

In an increasingly polarized world, Christians should be leading the way in thought and action on topics like this—especially in our own families.

We might not want to talk about injustice because we immediately think “politics,” but that’s a mistake.

This is a human issue that grieves the heart of God and we need to help our kids internalize it.

When was the last time you helped your kids process an unjust death like this? We’d rather these issues just get swept away in the news cycle and disappear from our consciousness.

But ignoring the situation might actually harm your child more than we realize.

It harms them by leaving them ill-equipped to think with the mind of Christ about a significant topic that occurs regularly enough to not be considered an outlier.

It harms them by allowing social media, news outlets, and schoolyard ignorance to be what shapes their thinking instead of you.

We don’t want that when it comes to sex.

We don’t want that when it comes to violence.

We shouldn’t allow that when it comes to injustice—racial or otherwise.

Just enter into the horror of it all, if only for a moment.

Let’s not allow another situation like this to pass by our news feed without engaging it—personally and as a family.

Let’s not miss the heart of God for all people or His anger toward injustice or our shared humanity.

Teach your kids how to empathize with the pain of others

Rejoicing with others can be challenging enough.

But we’re usually not comfortable allowing ourselves to feel our own grief, let alone someone else’s. That’s to our detriment—as people charged with ministering to and feeling with others, even those who may not look like us.

Hebrews tells us to “Remember those who are in prison, as though in prison with them, and those who are mistreated, since you also are in the body” (13:3). Let yourself feel what other people feel, especially when they hurt.

What might Ahmaud Arbery’s friends and family feel today?

I can take a moment to say his name and think about him and help my kids do the same.

I can challenge my kids to consider how people in the McMichael’s circle might be processing what their family members did.

“My kids don’t care,” you might say. I get it—but that’s the whole point.

To acquire a Christian heart and mind, we need to start caring about what God cares about.

Teach your kids how to think about ethnicity

As Christ-followers, we have to keep separating ourselves from how the world handles race and remind ourselves how God sees people.

Race is woven into the fabric of our cultural history.

It’s in the news. In politics. It’s in the classroom. In movies and pop culture. On social media. Everywhere.

If you fear talking about race, you’re not alone. It’s what first threatened to rip the church apart early in Acts (10:1-33).

It’s an emotionally charged topic most of us aren’t equipped to discuss.

But at the most fundamental level, we can teach our kids how God views ethnicity.

This is a great opportunity for your kids to learn that God intentionally created ethnic differences. To hear that He judges people not by the color of their skin but by their interaction with Jesus and others.

When was the last time your kids heard a sermon from Revelation 5 or 7?  Those chapters remind us that Jesus’ blood ransoms people from “every tribe and language and people and nation.” We’ll spend eternity worshipping Jesus and living in a new kingdom together—cross-ethnically!

As racial rhetoric swirls, realize that God is not colorblind—at least not the way we usually mean it. He created color and ethnic difference very purposefully.

When situations like Ahmaud Arbery’s death are in the news, we can teach our kids to ask, “What does God want to teach me about Himself through this person He created in His image who views and experiences the world differently from me?”

Like sex and money, if we don’t engage our kids about race, plenty of other people will—and already are.

Let’s help our kids think like citizens of the kingdom that we wait for, not just the one we currently live in.

Teach your kids to recognize injustice

“Justice” is one of God’s attributes. Injustice is a perversion of His Kingdom will, denying on earth what’s already true in heaven. Injustice in all its forms is satanic at its core.

Isaiah 1:17 reminds us, “Learn to do right! Seek justice, encourage the oppressed. Defend the cause of the fatherless, plead the case of the widow.”

So it’s wise for us to teach our kids about justice and injustice. Don’t be thrown off by their use in popular politics—these are significant Biblical terms.

And it’s wise to acclimate our kids to recognize injustice when they see it. To not be afraid to call something wrong in an age where they’re taught never to distinguish between right and wrong.

It’s good for them to become sensitized to evil acts of people toward one another. It’s ok to say, “What these men did in this situation was something that God hates. We should hate this, too. Not the men themselves, but their evil actions toward Ahmaud Arbery.”

Teach your kids how to pray beyond their own small world

Most of the time, I pray with my kids about things that matter to them.

That usually means they pray for friends, extended family, and themselves. Honestly, too often I regress into letting our prayers be almost entirely selfish.

But situations like Ahmaud Arbery’s deserve our prayerful attention.

“Let’s pray for his family members who are sad and angry tonight. That they would talk to Jesus about what happened and that He would meet them in the pain. For courage to stand for what’s right no matter what other people think. Let’s ask God to make sure the right things happen in the right way to the men who did it. And let’s pray for their family, too.”

Why not get in the habit of helping our kids turn their prayer life in the direction of national and world events, to crises that affect our neighbors both near and far?

Praying only for personal problems while never praying about injustice for others deprives our kids and actually may inadvertently teach them a wrong view of God.

Our kids need this guidance

As citizens of another kingdom we need to cry out to God and lament for the brokenness in this world. Especially for those who are actually suffering because of injustice right now.

Zechariah 7:9 says, “This is what the Lord Almighty says: ‘Administer true justice; show mercy and compassion to one another.’”

How do we bring justice in situations that seem so far away from us?

At the very least by allowing ourselves to speak about the injustice, then feel compassion for those experiencing the evil first hand.

By reaching out to people who feel this the most deeply and letting them know you care. That you feel outrage. That you’re sad.

By standing with them from a distance and praying for justice in a broken world.

It’s just Christian. And our kids need someone to teach them how to think like one, especially in areas we’d rather avoid.

If you want more help in shaping the four inner needs of your child’s heart, take FamilyLife’s free Art of Parenting course.

Ed Uszynski currently serves as Senior Content Strategist for Family Life. He and his wife Amy regularly speak at Weekend to Remember conferences and since 1992 have worked in various roles with Athletes in Action, primarily training staff and ministering to college and professional athletes. He has an MA and MDiv from Trinity Evangelical Divinity School and a PhD in American Culture Studies from Bowling Green State University. They have four children and live in Xenia, OH. Follow him on Twitter @Uszynski32. 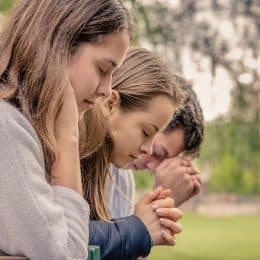 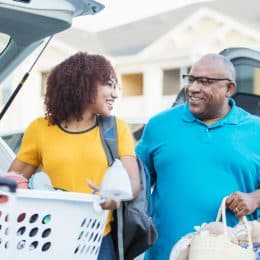