How to be a Princess

Editor’s note: In her book for young women, And the Bride Wore White, Dannah Gresh contrasts our culture’s view of sex with a biblical view of purity. Referring to Psalm 45, which describes the life of the King’s daughter, she writes that it “was written as a wedding song and was probably sung at many Jewish weddings in the days of King David. It’s also a wonderful figurative example of what God sees when He looks at you and me … the bride of Christ. He looks upon you and sees a princess. You are a princess. A princess enjoys the great benefits of being waited upon and being adorned with rich tapestry. In my mind, she is calm and contented with where she is today because she knows she is the princess and will someday be married to a marvelous prince.”

In the following excerpt from And the Bride Wore White, Gresh challenges girls in three practical areas of being a princess:

A University of Chicago sex study said that 54 percent of men thought about sex daily—a number that caused humorist Dave Barry to conclude, “The other 46 percent of the men are lying.” (Ha!) I’ve seen many studies about this and they vary some, but all agree with one thing. Guys think about sex a lot.

I am not trying to paint an ugly picture here, but sometimes young women are terribly naïve or they deny the overly sexual desires that God built into guys. Sometimes a girl’s actions, clothes, and dating choices are perfectly explosive fuels that may cause a relationship to burst into the flames of a tragic ending.

Since you are a princess, you need to be sure to conduct yourself as one! Here are three areas in which I see girls forgetting to present themselves as valuable, priceless princesses.

Belly rings. Miniskirts. Hip-huggers. The fashion world today screams sex for the poor guys out there who struggle to live a lifestyle of purity. Since clothes don’t affect girls and women in the same way, we continue to wear the latest trends. If you are like me, it’s a bit hard to get perspective on this since the fashion trends stare us down every single day. So let’s grab some perspective by looking at another day and age.

Little Women was written when the fashion was to push a young woman’s bust line up to her neckline. In the book, beautiful (and normally modest) Meg March went to Annie Moffat’s “coming out” party. The other girls attending convinced her to let them dress her, complete with a corset and low-cut neckline.

Meg blushed at herself when she looked in the mirror and determined not to let the way she was dressed affect the person she was, but it did very much affect her. Into the evening, her neighbor Laurie found her dancing frivolously at every offer, flirting freely, and drinking. He confronted her much like a brother, sarcastically admitting he didn’t like the way she was dressed.

Later, Laurie apologized for being so harsh with her, and Meg admitted the way she was dressed had made her behave badly, saying, “Take care my skirt doesn’t trip you up; it’s the plague of my life and I was a goose to wear it.” Laurie encouraged her, “Pin it round your neck, and then it will be useful.”

In the movie version of Little Women starring Winona Ryder, Meg’s mother put it all in perspective that night when Meg admitted her misguided fashion statement. Marmie told Meg, “If you feel your value lies in being merely decorative, I fear you will find yourself one day believing that is all you really are.”

On your dates and in your every day life, do you want to be merely decorative, a trait that will someday wear away?

I do not want to tell you what I think you should and should not wear. But might I suggest a litmus test for you wardrobe? When you put an outfit on, ask yourself, “Do I feel sexy?” I’m not talking about feeling good or attractive. I am talking about feeling seductive. You know what I mean! If you don’t know, then you are probably OK. But if you do know, then you probably have a few things in your wardrobe that need to go. If you feel seductive, you probably are, and that can be very dangerous on a date. It will change the way that you behave and the way your date expects you to behave. Be careful in choosing your royal wardrobe.

So, you’re dressed and ready to go. Where should you go? A princess should always stay within the confines of her own kingdom where she is safely guarded under the watchful eye of her public.

I have a friend named Mark who, when he was dating, knew his weakness was to be consumed with his physical desire. Even in his early twenties, he wanted his dating relationship to be governed by some strict principles. So, when Hannah caught his eye, he asked her father for the right to “court” her. They spent “dates” sitting on the sofa in her parents’ living room under watchful and loving eyes. They kissed for the first time at the altar of the Lord Jesus Christ as they exchanged vows to love each other for the rest of their lives. Wow!

As I have conducted purity retreats, the girls tell me two things about where they will go on dates. First, they tell me that nothing good ever happens when they are alone with guys. Their conclusion is always this: If you are truly serious about guarding your innocence and living a lifestyle of purity, you won’t go to an apartment, a house, or anywhere where you are truly alone … ever. So, how serious are you? Are you serious enough to stay public with your relationship?

Some of the most memorable dates I had with the man who is now my husband were in a laundry facility. Some place as crazy as that can be a place for romance to bud. The fact is that we could be monitored by “our public,” but we were in our own little world as the washers and dryers dulled the sound of others around us. If you want to spend time getting to know a guy, pick a place where your public can watch you while you talk.

The second thing that girls who attend my retreats tell me is that nothing good ever happens in a horizontal position. Even if other friends are around and they’re lounging on a beanbag together, they agree that lying down is a bad line to cross. Lying down is very symbolic of letting your guard down. Don’t do it. Stay vertical!

The conduct of the princess

Now you’ve probably got an idea of whom you will be with, how you will dress, and where you will or won’t go. Now, how will you act?

Wearing your heart on your sleeve and not being cautious with your actions is not a good idea. It sets you up for great hurt and, to be honest, guys are not nearly as likely to desperately yearn for you when you are so easily caught! Guys are competitive and have an insatiable need to get what they think they have to earn.

Jill is a freshman in college who is dating an older guy named Jonathan. She has worn her heart all over her sleeve in this relationship. She has told him (and he has told her) that they will be married someday. They’ve talked of family, dreams, careers, homes, and everything they possibly can. Because they believe they will end up married, they have had a really hard time keeping the relationship pure.

But right now, Jonathan is barely interested in pursuing her and they are taking a “break” from the relationship. He’s more interested in his band, his friends, and his future. Why shouldn’t he be? He already has her right where he wants her. She is heartbroken and finds it difficult to wake up in the morning.

She is experiencing some of that pain because she is as committed to him as if she were married to him and finds herself unsatisfied. In having everything she wanted in the relationship very quickly, she found herself in a period where she has nothing. She forgot that she was single. She forgot that she belongs to herself and God during this “season” of her life.

Joshua Harris said, “God gives us singleness—a season of our lives unmatched in its boundless opportunities for growth, learning, and service—and we view it as a chance to get bogged down in finding and keeping boyfriends and girlfriends. But we don’t find real beauty of singleness in pursuing romance with as many different people as we want. We find the real beauty in using our freedom to serve God with abandon.”

Take a look at the women in the Bible. The ones with the big headlines are most often those who bridled their hearts to make wise head choices in relationships. Look at Ruth and … let’s see, what was her sister-in-law’s name? Well, the two of them were stuck with their old mother-in-law with no hopes of finding love again. The mother-in-law gave them the chance to follow their hearts and leave.

Ruth stayed, though her sister-in-law ran for it. Ruth knew staying was the right thing to do, but it didn’t necessarily feel good. Guess what? In the end, God created a rich, beautiful love between her and Boaz and they became the great-grandparents of the great King David. Because Ruth was governed by her value and didn’t wear her heart on her sleeve, she played a vital role in the lineage of David (and Jesus). Wow! What a great love story—far better than the one she may have written with her life if she had forgotten her value and allowed her life to be governed by her heart.

Okay. Now it’s time to work! I’d like you to do three things with your journal. Take your journal into your clothes closet or sit with it next to your dresser wardrobe. Look through your clothes and kick out what needs to go … now! Don’t give that stuff to someone else. Trash it.

Now, tell God how good that feels. (Or if you didn’t have to trash anything, praise Him for keeping you modest whether through your own decision or rules that your parents have.) While you’re in there writing, jot down some thoughts on where you can go on a date where you live—places that allow you to stay public!

Finally, talk to God about your heart. Write down the names of people you’ve given it to and ask God to reclaim it. Trust Him to write a love story beyond your wildest imagination. Determine to be governed by your value, not your heart.

Adapted from And the Bride Wore White, by Dannah Gresh, 2012, Moody Press. Used by permission.

Why We Need Marriage

When mentees exhausted from wedding prep wonder if marriage is actually necessary, be ready with a few critical truths about its purpose and beauty. 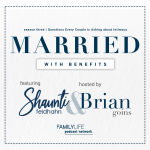 When It Comes to Sex Drive–What’s Normal?