She Hated Her Husband

Brian and Julie Moreau thought there was no hope for their family.

Little Madissen and her big brother, Branden, often huddled in the closet together, wondering when their parents’ yelling would stop.

Brian and Julie Moreau didn’t protect their kids from their constant fits of rage. Their children “were always right in the middle of it,” Julie says, “with us screaming at each other.” 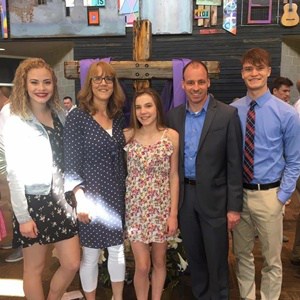 Julie regrets the time she shouted over and over to Brian, “I hate you! I hate you!” with the kids sitting right there.

Brian just turned around and walked out of the room. But something broke deep within his soul.

Was there any hope for this family?

Limping along in marriage

Brian and Julie were very possessive of each other. That started even before they married in 1991. They describe themselves as jealous, immature … not knowing what real love meant. “We had no business being together,” Julie says, “and my parents did not like Brian.”

Brian couldn’t seem to keep a job and his goal in life was to have fun. He says that Julie was the responsible one who had money in the bank.

Julie continually pointed out to her husband what he was doing wrong. She says that he had a money problem.

Julie was grateful for her one good friend. They often got together and criticized their husbands. Julie would complain about Brian’s spending habits. She’d also talk about the fights she and Brian would have, and why they were always his fault.

Brian knew the woman’s husband, and they spent time together complaining about their wives. Brian would tell his friend about how Julie was trying to control whatever he was doing.

In 2000, after being married for nine years, Brian accepted a position as an internet technology manager at a hospital three hours away. When the Moreaus arrived in their new community, Julie began a home daycare center. She poured her life into the children. Brian poured his life into his job.

Because of Brian’s new position, the money issues in the family eased off. “At that point,” he says, “I had become committed to getting a career and holding a job down and supporting my family.”

Someone he could talk to

Brian often worked late into the night, and he became good friends with a co-worker—a married woman. It was easy for him to talk to her. They shared about their problems at home.

Brian didn’t want to be around his wife. “We didn’t like each other very much.” That’s why he deliberately came home after everyone was asleep in bed. And instead of going into the bedroom with Julie, he would prop himself up on the couch and fall asleep watching TV.

Brian finally gave in. “Fine, whatever,” he said. “… I’ll stay for the kids but I’m not staying for you.”

A couple of weeks later one of Julie’s friends told Julie that she had heard rumors of Brian having an affair. Julie confronted her husband.

Brian responded by saying Julie didn’t trust him and that he would never have an affair. The only reason he wanted a divorce, he said, was because he wasn’t happy. He also said the kids would be better off if they divorced.

After Julie confronted Brian two or three more times, he finally admitted to the affair. “I can have conversations with her that I can’t have with you,” he said.

The Moreaus’ relationship continued to deteriorate until Julie saw no hope for her marriage. In July 2004, she reluctantly told her husband, “Fine, let’s get a divorce.”

For the next two months, the Moreaus’ marriage was like a runaway roller coaster. One day Julie said, “It’s over, I can’t do this,” and the next she said, “We have to try.” She saw an attorney. Brian looked for an apartment for himself. He asked for her forgiveness. Then they said to one another, “Let’s try to work this out.”

Up and down. Their marriage was out of control … and their three children were watching.

“This craziness continued until the end of August,” Julie says. That’s when Brian sat on the couch at home with his two oldest children; Madissen was 6 years old and Branden was 8. He told them that he was leaving.

“Does that mean that we’re going to have another house?” Madissen asked. “Will I get my own room?”

Branden said nothing. He just sat there.

About that same time Julie and Brian went to their pastor for counseling. He told them that some marriages just don’t work. But other new friends disagreed. They told Julie and Brian that they could make it. “We had these Christian people coming around us that were insisting that we couldn’t get divorced … that we had to work it out,” Brian recalls.

Julie’s family physician was one of those friends. He had met Brian at the hospital, and his wife led a Bible study that Julie participated in. He took Brian to lunch one day and brought his Bible with him. “I told him to close the Bible,” Brian says. “I said I didn’t need that and I wanted some real-world advice.”

A ray of hope

In the fall of 2004, a friend handed Julie a brochure about an event called Weekend to Remember® marriage getaway. She suggested that Julie and Brian try it before they divorced. Julie almost threw the brochure away.

Brian came home for lunch that day, and Julie handed him the Weekend to Remember brochure. He returned to work, and about two hours later the phone rang. It was Brian. He told Julie that he had registered for the getaway, had booked a hotel room, and that she needed to be sure her parents could watch the kids. For the first time in years, she felt a little optimistic.

Julie had an appointment with her family doctor on the Friday morning of the Weekend to Remember. He shared Scriptures with her in his office and prayed for Brian and her.

On Friday night at the conference, the Moreaus heard about threats to marriage. They broke down in tears when they realized that they had been doing marriage wrong—they had been destroying themselves and their family.

On Saturday morning, when the speakers told about God’s plan for marriage, Brian and Julie knew there was hope.

Brian remembers seeing an illustration of the cross … and understanding the gospel much differently than he had before. When the speaker explained that a personal relationship with Jesus Christ is needed to make a life and a marriage whole, Julie and Brian each asked Him to be Savior and Lord of their lives.

Julie learned the meaning of true forgiveness at the Weekend to Remember. She also realized for the first time that Brian was God’s gift to her.

When Brian and Julie left the getaway they were changed people. “The bottom line was,” Brian says, “we both accepted Jesus and we now had that Helper to help us.”

Today the word “divorce” never comes up in either Brian’s or Julie’s vocabulary. “It never will,” Brian says. “We have a different type of commitment.”

And instead of needing help for their own marriage, the Moreaus now encourage struggling couples. They are on the Weekend to Remember® getaway volunteer team in Des Moines, Iowa, and have hosted The Art of Marriage® video event. They have also led several small-group Bible studies in their home, using what is now called The Art of Marriage connect series.

Julie says, “We will never stop fighting for godly marriages,” and she adds that praying together is part of the glue that holds them together.

Looking back, Brian says that their marriage has taken a 180-degree turn. He and Julie read the Bible together and understand how God has designed their roles in marriage. “She is a different wife, a completely different wife.”

“Even when I didn’t believe in my marriage,” Julie says, “it didn’t matter, because God did.”

Branden is now 21 years old, and Madissen, 18. They both vividly recall how their parents used to yell incessantly at one another. Madissen says that she was terrified when she thought her parents were getting a divorce. “I remember sitting in the closet or under my bed with my brother, and we would cry.”

“All my parents ever did back then was fight,” Branden says, “… I was tired of having to stay up really late some nights just listening to them arguing.”

Madissen describes Brian and Julie as her “two happy parents.” Branden says, “I know that God will keep my parents together, and they will never get a divorce. I thank God for that every day.”