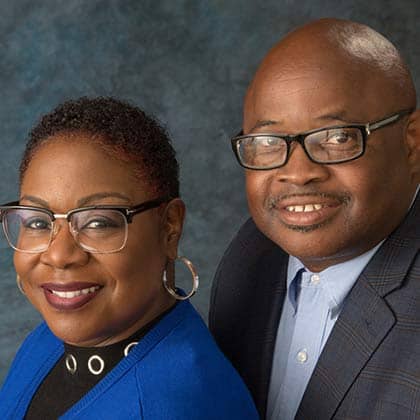 Darryl and Gwen Smith were both raised in Chattanooga, TN. After High School, Darryl served in the US Army for three years. God saved him in 1991; he was licensed to preach in 1992, and ordained in 1994. Gwen studied Organizational Management graduating with a Bachelor’s Degree from Covenant College. She gave her life to Christ in 1987 and they both joined staff with Cru in 1996 with a heart for young people.

For the first six years of ministry, they worked in the field reaching and discipling students at Howard High School in Chattanooga. Darryl also served as Chattanooga’s City Director and the Southeast Regional Director. In the summer of 2006 Cru asked Darryl to serve as the Executive Director for the High School Ministry. They both were also invited to join the Campus Ministry Executive Team. Gwen also became the Event Coordinator for the Campus Fund Development team.

Throughout their time of stewarding these different leadership roles that God has called them to, they have both been committed to utilizing their gifts by speaking and teaching the word of God all around the world.

In 2017 Cru announced the creation of a new role within the U.S. Leadership team in which the Lord led Darryl and Gwen to co-direct. Their journey has prepared them to lead as the National Directors of Oneness and Diversity in this next season of their ministry, with dependence upon Jesus to help create a culturally diverse environment throughout all of Cru. They believe for, envision, and are trusting the Lord to see a great expansion of The Gospel through the unity of mind, heart, and purpose.

with Darryl and Gwen Smith
For Darryl and Gwen Smith, their divorce came in the middle of their love story. Ron discusses with them their story of well-intended, but immature love that God ultimately led to restoration, forgiveness, and a continual process of healing. View Show Notes →