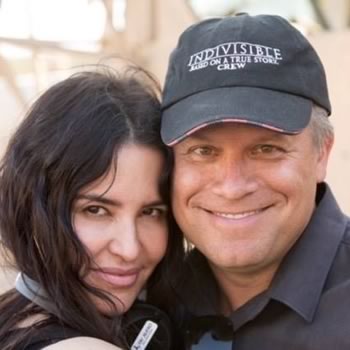 Dr. David Evans is an optometrist and owner of Total Eye Care, P.A.in Memphis, TN, but grew up writing and filming productions. Esther was born and raised in Elizabeth, NJ, and grew up loving ballet and dance.

In 1994, David recognized the need for an annual "passion play" production at his home church of Calvary Church, to share the message of the gospel with the community. Esther used her gift of dance to develop the choreography. Over the next fifteen years, the production grew to a cast and crew of over 250 with huge sets, hydraulic lifts, computerized lighting, and exotic animals.

In 2008, David and his wife, Esther, joined a large group from Calvary Church to watch Fireproof on opening night. "I realized during that movie that God had been putting us through training during the fifteen years of our passion play," he says. Soon after, Graceworks Pictures was born and released The Grace Card in 2011.

David and Esther live in Germantown, Tennessee. They have three sons - Houston, Matthew and Garrett.

Broken Families: A Casualty of War

with Darren and Heather Turner, D...more
Army Chaplain Darren Turner and his wife, Heather, talk about the realities of deployment. Dr. David Evans and his wife, Esther, tell how they first heard about the Turners and what motivated them to turn their story into a movie. View Show Notes →

with Darren and Heather Turner, D...more
Army Chaplain Darren Turner and his wife, Heather, join producer David Evans and his wife, Esther, to talk about the release of the new feature film about the Turner's life, "Indivisible." View Show Notes →