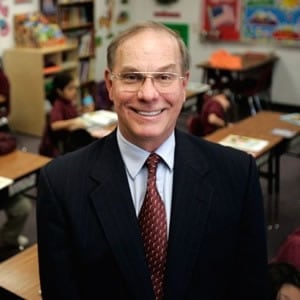 He is a devout Christian conservative who, in the 1990s and 2000s, became one of the most prolific political donors to Republican candidates, conservative causes and Christian ministries in Texas.

A strong supporter of school choice, Leininger started CEO San Antonio to give private school vouchers to low-income students to allow them to attend the school of their choice. He typically focuses his campaign giving on candidates who support vouchers or school choice.

Leininger grew up in Indiana and Florida before settling in San Antonio after serving in the Army as a doctor. He later became an emergency room physician for more than a decade.

His fortune grew out of his side business as a salesman for a Chicago company that made specialized hospital beds. The company fell on hard times in the mid-1970's. Leininger bought the firm and renamed it Kinetic Concepts. Business bounced back and Kinetic Concepts became the foundation of Leininger's personal wealth.

Alone Yet Not Alone

with Jim Leininger
Dennis Rainey welcomes Jim Leininger to talk about the release of his new movie, "Alone Yet Not Alone." View Show Notes →