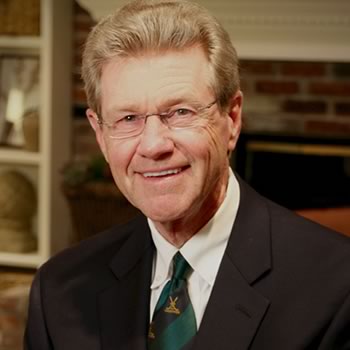 Tim Philpot is a lifelong resident of Lexington, Kentucky. In 1971, Tim married Susan Davis, who grew up in Congo, Africa as the daughter of missionaries. Tim and Susan have no children and have been married for over 40 years.

He was a trial lawyer for more than 26 years, concentrating on employment law, family law and civil rights cases. In 1990, Tim was elected to the Kentucky State Senate where he served two terms until 1998. He was named “one of the ten best” Legislators by the Lexington newspaper in 1992, even though they repeatedly disagreed with him, saying there should be room on the list for “a man with a conscience.” His strong stand on ethics led the paper to call him “a lone voice crying in the wilderness.”

In 1996, Tim was selected as President of CBMC International, an international ministry presenting Christ to business and professional people. He has been an active member of CBMC since 1978. He has spoken in 66 nations, primarily to CBMC groups, Parliament groups, legal groups and business groups. Tim retired from CBMC International on September 30, 2003 to return to his legal career fulltime.

Tim also has written two books. “Ford’s Wonderful World of Golf” is a memoir to his father, evangelist Ford Philpot, published in 2013. In March 2016, Tim published his second book, “Judge Z: Irretrievably Broken”, a novel about family court and the death of marriage in America.

with Tim Philpot
Circuit judge Tim Philpot talks about the lessons he's learned in family court and shares how adoptions are his favorite part of the job. View Show Notes →

with Tim Philpot
Tim Philpot explains how no-fault divorce works and why he encourages couples to seriously consider how their divorce will affect the children in their care. View Show Notes →

A Look Inside Family Court

with Tim Philpot
Tim Philpot, a circuit judge in family court in Lexington, KY, reveals what it's like to be a judge, presiding where nearly 90% of cases involve unmarried couples. View Show Notes →